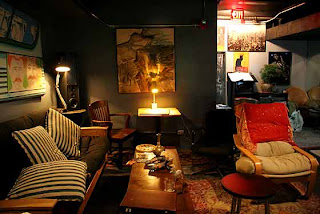 Went to a place call Fat Cat's. It's a hard place to describe. They don't serve fancy liquor, only beer and soft drinks so it's not really a bar. They have live jazz but the listeners are white NYU college students sitting around velvet couches eating pizza brought in from the outside. It might make it a jazz venue, but one that I wouldn't recognize. Oh, also the place is in a basement and half of it is dedicated to billiards, ping-pong, and chess tables. They have a strange music selection there. When they have a live act it's generally an experimental jazz-funk trio whose erratic and impromptu play you'd only expect to find nowhere except at a jazz hole in the depths of the west village. When they're not on the soundtrack switches from punk rock to classical to Indian sitar music.

The crowd is equally confusing. It's somewhere a mix of artsy hat wearing NYU kids, white afro jazz aficionados, greasy pool sharks, and the angrily-focused bearded chess players you see at the park.

There's something cool about a place that clearly grew organically - as in - you go into Fat Cats today and you think there was no way any of this was drawn up in the business plan. I first went to Fat Cats in 2005. Back then, the billiards and ping-pong and the jazz club were separated by a wall as if they were two separate venues that just happened to share the same entrance. On one side of the wall it was like a sweaty gym basement. On the other, a dusky club with black and white photos of jazz musicians. Before that time people tell me that it was just a regular standard billiards hall in a basement.

New York is a funny place. Fat Cats went from a place where you played pool, to a place where you played pool and you could listen to live jazz, to a place where you could play pool WHILE you listened to live jazz along with all the artifacts of a weird social experiment gone wonderfully wrong attached. Businesses evolve in New York and it's not the "McDonald's has coffee" kind of evolution. It's more like business owners have friends with different passions and things just sort of had a weird way of working out kind of evolution. It's fun to see.

I'm not so sure exactly how many people there are in the ping-pong / chess / jazz / beer crowd - but then - this is New York. There's a niche for everything.
Posted by mundanelunacy at 4:38 PM